Ways to use Green Tomatoes 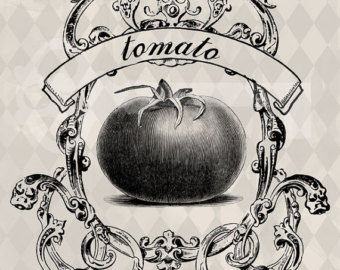 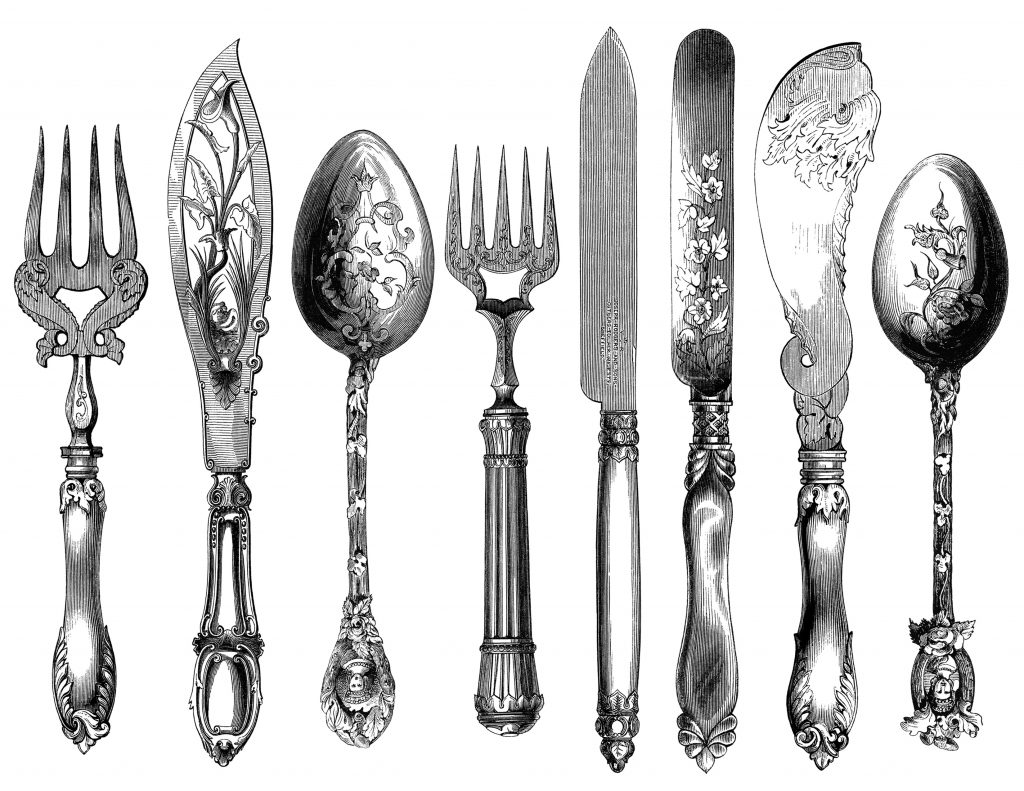 Green tomatoes are firm and moist but hardly juicy like their ripe red counterparts, and they’re sour. But they’re great for cooking. They will soften when cooked, but won’t turn to mush.

Cut green tomatoes in thick slices and soak in salt water for an hour. If there is not time, they may be used without soaking. Then drain, sprinkle with salt and pepper, dip each slice in beaten egg, roll in sifted bread or cracker crumbs and fry in hot butter until a delicate brown on both sides. Dredge them with powdered sugar. Take up on a hot dish and pour the gravy over them. Serve hot.

Wash and drain large, round green tomatoes. Cut a thick slice from the stem end, scoop out the seeds and place in salt water for an hour. To one pint of bread crumbs add a spoon of finely minced celery or parsley, three tablespoons of soft butter, salt and pepper to taste and enough hot water to moisten. Mix well and fill the tomato cups. Set them in a pan containing a little boiling water, cover and bake slowly for one hour; then remove the cover and brown slightly.

Peel and slice the tomatoes and pour boiling water over them. Let them stand for a few minutes, then drain. Line a pie tin with nice pastry, fill with the tomatoes, add one-half cup of sugar, one tablespoon of lemon juice, one of water; sprinkle over one teaspoon of flour and dust with cinnamon. Cover with a top crust and bake. A tablespoon of butter cut in bits and added to the pie is an improvement.

Peel and slice the tomatoes, then take one or two lemons, according to the size of pie, peel them, removing carefully all the bitter white skin, and cut into slices, rejecting the seeds. Line a pie tin with pastry, put in a layer of tomato, then a layer of lemon, then another of tomatoes; add a cup of sugar on top, dot with bits of butter and bake. Then cover with a meringue made of the whites of one or two eggs beaten stiff with one or two tablespoons of powdered sugar. Return to oven and brown slightly.

One quart of finely chopped green tomatoes, six large apples peeled and chopped fine. Mix thoroughly with three cups of sugar, three tablespoons of flour (mixed with the sugar), one teaspoon of salt and one cup of vinegar. Bake with two crusts.

Seven pounds of green tomatoes chopped fine, four red peppers and one quart of vinegar. Boil together for one and one half hours. Then add one pound of brown sugar, two tablespoons each of mustard and salt, one tablespoon each of ground allspice and cinnamon and one teaspoon of ground cloves. Boil for three hours or longer, then seal in cans or bottles. 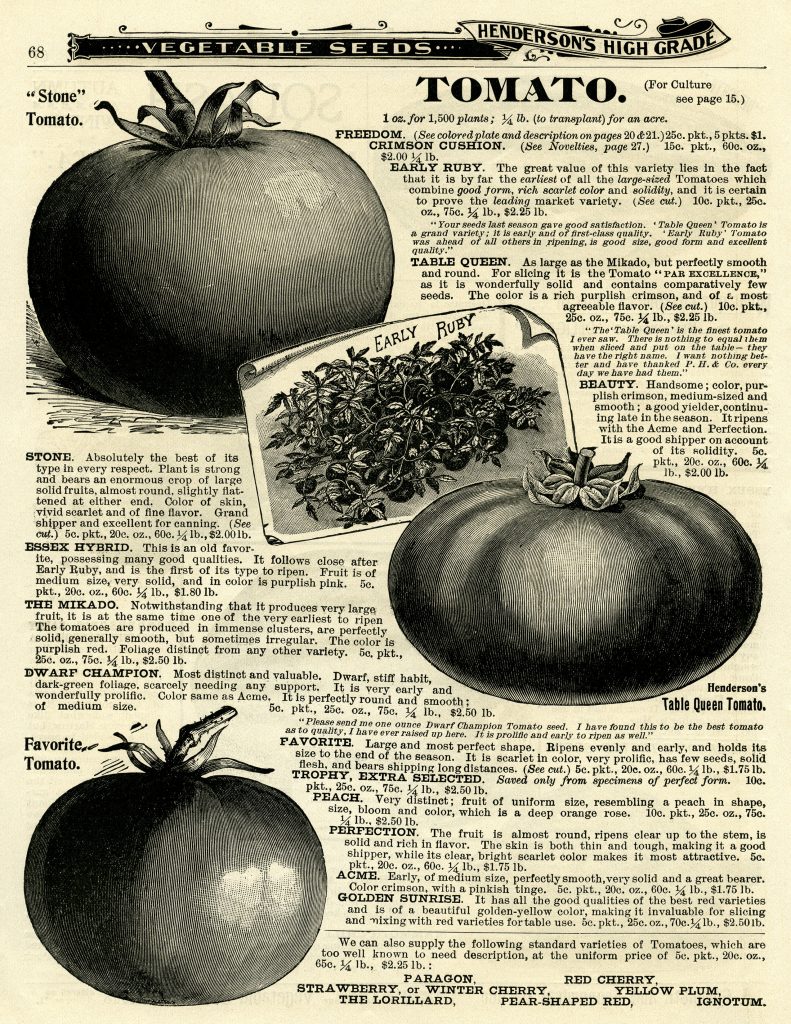 Take 12 medium sized green tomatoes and 12 small pickled limes. Put both through the food chopper, using the medium sized cutter and removing the seeds from the limes. Add six cups of sugar and let cook slowly for three hours. Put into jars or glasses and when cool cover with paraffin.

For a large quantity of mincemeat take one peck of green tomatoes; slice them, sprinkle with salt and let stand for 24 hours. Then drain, chop fine and add 24 apples chopped fine, five pounds of brown sugar, three pounds of seeded raisins, two pounds chopped citron, one tablespoon of cinnamon, one tablespoon each of cloves and grated nutmeg. Add one pint of vinegar and cook one and one-half hours; then put away as any mincemeat. It will keep until used.

For those who do not have apples, the following recipe is given: Chop fine one peck of green tomatoes, drain for one hour in a colander, then put in a porcelain kettle with five pounds of brown sugar, two cups of boiled cider (or water may be used), one-half cup vinegar, two pounds of seeded raisins, one tablespoon each of cinnamon, cloves, allspice, nutmeg and salt. Boil all together until as thick as desired.

Slice one peck of green tomatoes and sprinkle them with one cup of salt. Let stand over night, then pour off the liquid and chop the tomatoes fine. Add five green peppers chopped fine. Scald two quarts of vinegar with one pint of sugar, put in the tomatoes and peppers one ounce of whole cloves, one tablespoon each of cinnamon and allspice and one grated nutmeg. Let them boil until tender, put in glasses, and when cold, cover with paraffin.

For one peck of green tomatoes allow six pounds of sugar, six lemons, one tablespoon of ginger and one cup of water. Cover the tomatoes with boiling water for five minutes, then drain and slice. Slice the lemons, removing the seeds; put them with the tomatoes, sugar and ginger into a porcelain kettle, pour over them a cup of water, cover and cook slowly for one and one-half hours. Skim off any scum that rises while boiling. Remove from fire and let get perfectly cold, then set over again and let simmer gently for one hour longer. Put in jars and keep in a cool place. 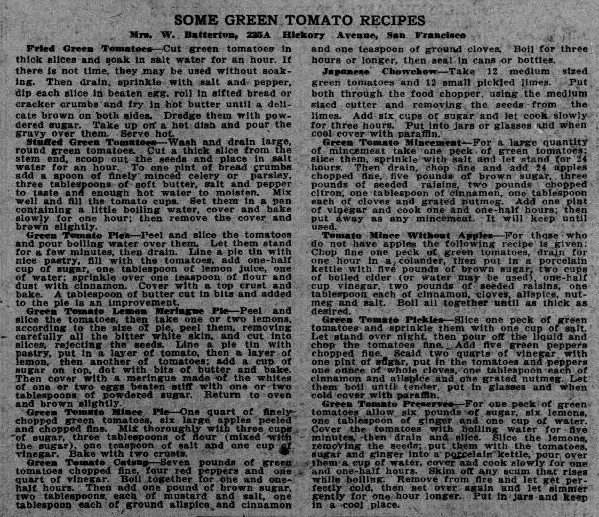 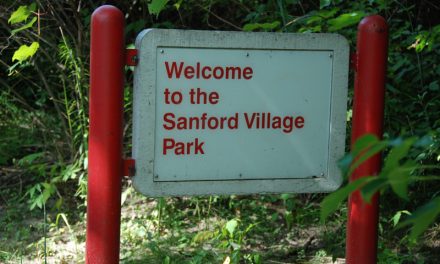 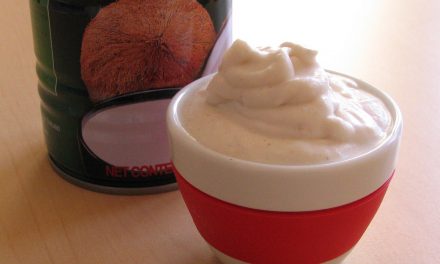 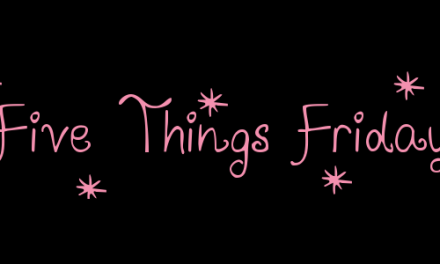